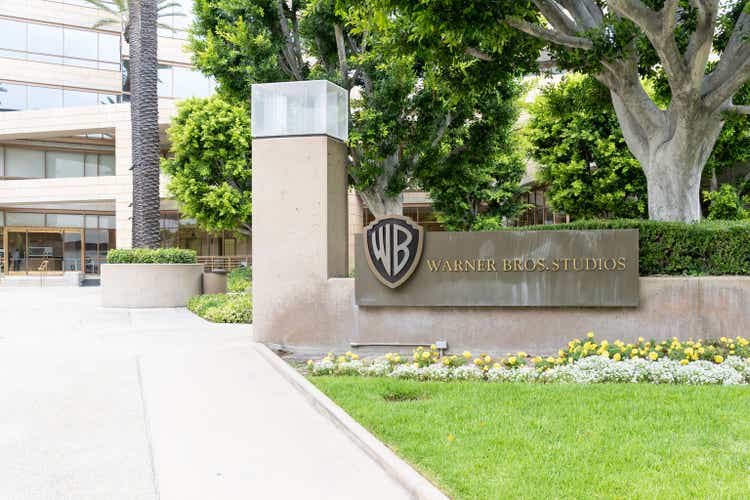 Warner Bros. Discovery (NASDAQ:WBD) management can sound as positive as they want. But this market is focused on cash flow and free cash flow and that disappeared in the current quarter. So, the market is going to look at the debt and basically say “yeah, right!” while ignoring some very solid plans in place by management. There is a lot of discussion about “cleaning house” and repositioning along with other priorities. But nothing hurts more than having to show virtually no cash flow for the size of the operation and then negative free cash flow for the quarter.

This management has a very conservative view of free cash flow as shown below:

The other thing mentioned during the conference call was a one-time payment committed to before the acquisition (this included legacy retention bonuses as well as merger and acquisition costs in the conference call) of about $400 million. Taken together, the nonrecurring events mean that free cash flow is going to be running at least at the previous rate of around $700 million to $800 million of free cash flow per quarter. This does not include more merger related payments that will not repeat. Therefore, it is quite possible that free cash flow is making progress even though management presented the above statement showing free cash flow down compared to previous quarters and the year before.

The cash flow statement provides more evidence that cash flow is better than what has been presented by the market.

The cash flow statement again shows cash flow in the current year from operating activities down from the previous year despite the far larger company. The obvious line on the cash flow statement is the first one highlighted in yellow. The “Film and television content rights” line is a line that soaked up a whole lot of cash flow. It would appear that the cash generated by operating activities before changes in accounts is closer to $10 billion despite the one-time merger charges that have occurred elsewhere on the income statement. That is extremely encouraging because those accounts as a group are not likely to have that large a negative change (to soak up cash) in the next fiscal year.

Management later shows on the cash flow statement that $6 billion of the debt has been paid back so far. That is a darn good start to the debt repayments considering that management is also reworking the acquisition for better profits which has resulted in a fair amount of one-time cash uses.

The market may think that “management is nuts” or overly optimistic. But the evidence presented shows that there is the beginning of some very generous cash flow that should easily service the debt load.

Management also mentioned during the conference call that adjusted EBITDA is not close to where it should be as it is still lower than one year ago. But adjusted EBITDA is also beginning to move in the right direction. It should also be noted that on these statements there is about $2.5 billion of “Restructuring and Other Charges” that will not be on next year’s statements.

The current quarterly rate of Adjusted EBITDA, if sustained is at a roughly $9.6 billion run rate. That is beginning to make the forecast of management for the next fiscal year very reasonable even if the advertising environment continues to soften. Should that prove correct, then EBITDA will climb further as the economy recovers before considering other management improvements.

Of course, this is contingent on the continuing improvement of EBITDA. Management’s actions that have resulted in EBIDA improvement obviously must continue. Mr. Market clearly believes those actions will not be successful at the current time and EBITDA will not improve. That is what makes this a contrarian opportunity. But management will next provide guidance as to where at least some of that improvement is coming from.

Management raised the amount of synergies achieved within the organization.

As management digs into this rather large acquisition, there is likely to be further announcements to the upside. The company acquired a division from AT&T with very little if any free cash flow from the “looks of things”. That implies considerable future synergy potential and other sensible cost cutting moves that may well unleash a cash torrent in the future. Clearly management is not there yet. But what is shown above is a darn good start.

This management and several companies I follow have long stressed that it takes time for management actions to show through. The fact that this management jumped into action makes the idea that some results will be apparent next year believable. Normally it takes longer with an acquisition this large.

But the house cleaning and all the headlines lead one to believe there will be results faster than normal for this large acquisition.

Management’s forecast is looking more reasonable as time goes on. A large acquisition like this one is going to take some years to “whip into shape”. But adequate cash flow appears reachable (and it appears reachable fast). Next year should see EBITDA and cash flow continue to climb as the big surprises decline.

The bears are having a field day with all the write-offs and the cash flow disappearance due to merger and acquisition payments. That should have been expected before this whole thing ever began. But it is easy to lose faith with a lot of negative information that inevitably comes first whenever something this large needs to be turned around fast.

Management already has an annual rate of roughly $9.6 billion EBITDA as discussed above. Getting to that $12 billion guidance shown above next year involves finding another $600 million in either income or cost reductions. This management will likely try both and is likely to succeed beyond $3 million per quarter by the fourth quarter of fiscal year 2023.

This was one very large acquisition. Acquisitions this large generally have a poor history of success. But this management has a comprehensive plan and appears to have in place the elements to be one of the few acquisitions this size that succeed.

There are a lot of other things that management can do to increase value. They mentioned that there have been no Superman movies in ages. They also went through all the other franchises that are essentially just sitting there. If Disney (DIS) can be successful with franchises (and most would agree they are), then there is likely to be a whole lot of value to unlock with the franchises acquired this time around.

Because of this and other possibilities, my suspicion is that EBITDA projection for 2023 is conservative. It stands a good chance of being raised as the year progresses unless we end up with a severe recession or unexpected weakness in a key part of the business.

While the market concentrates on the cash flow disappearance, I will be looking at what will not be spent next year (because it is a onetime payment and therefore represents cash flow or even free cash flow next year) combined with operational improvements to make sure that EBITDA remains conservative. The next few years after that should show sequential improvement.