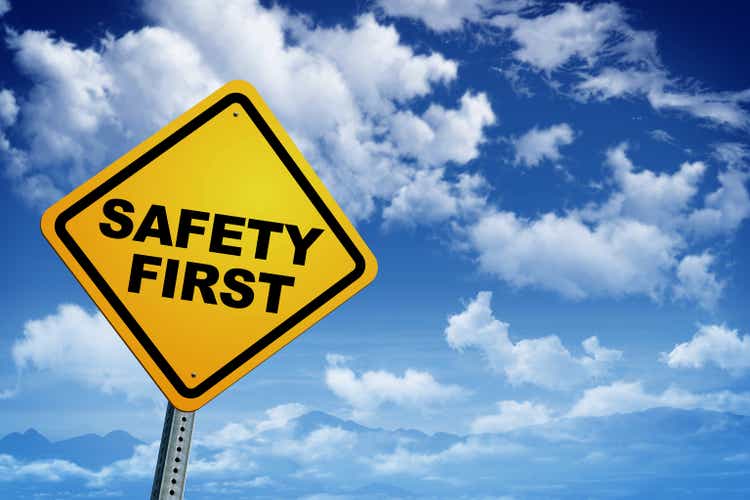 I have written up the Germany-based chemicals manufacturer Lanxess (OTCPK:LNXSF) (OTCPK:LNXSY) twice, in April 2019 and, after a strong outperformance of the idea, again 7 months later. Then came the pandemic, the stock crashed with the market, but recovered quickly afterwards, as even lockdowns barely impacted the company’s earnings power.

While especially the history section in the first article is still relevant for background, the details of the story have changed a lot since that time. Lanxess has continued to morph into a higher-margin, less cyclical specialty chemicals producer and is now entering the very likely European (and maybe global) recession from a much stronger position.

One aspect of the story, however, has remained the same: Given how much is going on under the hood, it is hard to gauge the risk/reward from a single glance at a data terminal.

In this article I will show what a superficial glance is missing: In fact, Lanxess has solid downside protection, while its full strength has yet to play out – but will certainly play out over the next few years.

(Please note that throughout this article I have simply translated Euro figures 1:1 into USD.)

The following key figures probably don’t look that appealing at first sight, especially since everybody knows that a German chemicals manufacturer is obviously impacted by the European gas crisis:

Yet there are some important pieces missing from this overview:

All in all, fast forward 2-3 years, Lanxess’ key metrics should look as follows:

At a modest EBITDA-multiple of 8x, these figures would lead to an EV of $11.7B and a market cap of $9.7B. With 80m projected shares outstanding after buybacks, the resulting share price would be $121, i.e. 3.4x the current price.

While this looks enticing, if we factor in the potential HPM divestiture for $2.5-3B (depending on realized synergies and growth), in 2026 Lanxess could have net cash of ~$1B and earn ~$1.2B of EBITDA (excluding the projected $250m from HPM). A multiple of 8x at this point would lead to a share price of $132.

Most importantly, the option to divest HPM for an already fixed multiple provides robust downside protection. Within 3 years the market should consider Lanxess to be virtually debt-free or even in a net cash position. (Whereas the superficial investor staring at the key metrics in our first table might be concerned about a 3.5x leverage ratio in a rising interest rate environment!) This means that there is no way the company will stay at its current market cap of $3B – at least if it keeps delivering EBITDA at the currently projected levels.

As we have seen, as long as Lanxess’ profits don’t suffer permanent impairment, the mid-term returns should be great. So let’s look at some of the key factors that could impact profit generation.

The potential impact of a full-blown gas embargo in Germany was quantified in great detail by the company on its Q1/22 call. While Lanxess does not receive Russian pipeline gas (its plants are on the most Western edge of Germany), a lack of gas elsewhere in Germany would almost certainly lead to curtailments. At worst, the direct effect on EBITDA would be ~10%. Only one plant would shut down, other 4 plants would reduce output. All the impacted plants contribute only modestly to profits.

Clearly, the indirect impacts of such a scenario (deep recession, demand destruction, competitive pressures) are impossible to quantify. Yet, we should not forget that Lanxess has an international footprint and following the HPM divestiture, its German footprint will shrink even further. All its major acquisitions were U.S.-based companies (Chemours, EKC, IFF MC).

As far as the cost and competitive aspects are concerned, 40% of Lanxess’ energy costs depend on German gas.

Given the importance of the chemical industry for the German economy, robust government subsidies are being prepared as I write to lower the energy costs for consumers and businesses and enable industries to stay afloat despite sky-high energy costs. While these won’t be able to support otherwise uncompetitive industries forever, they can certainly bridge a period of transformation and adaptation. Hence, given Lanxess’ international scale, I have little doubt that even in the case of continued prohibitively high energy costs in Europe the impact on profits will be rather small and approximate at worst the ~10% mentioned above.

Lanxess has been very successful in passing on price increases, testimony of a highly specialized product offering which is not easily substitutable. Moreover, inflation and higher interest rates will result in much lower defined benefit liabilities. In contrast, rising interest costs are not really relevant, since Lanxess enjoys the HPM backstop and can, if deemed necessary, reduce its debt to zero as soon as 2026. As far as capex is concerned, the company has been morphing into an increasingly asset-light model, hence it should be much more isolated from inflated replacement capex over the coming years than the average chemicals manufacturer.

Lanxess makes roughly half of its sales in Europe, a quarter in the Americas and a quarter in Asia. Hence, its investors are somewhat hedged: If Europe recovers from its current crisis, its currency will rise and Lanxess’ international earnings will experience a drag from a lower USD. Following the HPM divestiture, foreign earnings will become even more important. Hence, for U.S.-based investors betting on Lanxess means a bet on lower international earnings, but in a better economic environment, coupled with the appreciation of the Euro. Therefore, overall, the higher Euro should not hurt and would likely be a net benefit. – On the other hand, if things go bad, the Euro might depreciate further and would overall represent a drag on investment returns. While Lanxess would benefit from higher international earnings, its stock would be worth less in USD terms. Overall, the worse economic environment and the lower Euro would likely outweigh the benefit from forex-driven higher earnings.

HPM’s main clients are in the automotive and electronics industries. For example, the new JV will deliver high-performance polymers that lower the weight of electric vehicles and produce many of the materials necessary to build smartphones. After the HPM exit, Lanxess believes it will benefit from being less exposed to the auto industry, at least over the long term. In the near term, industry experts are forecasting robust auto production activity. In fact, the past two years have seen rather low unit numbers, as supply constraints limited the manufacturers’ production ability. Therefore, used car prices skyrocketed, as desperate consumers preferred to overpay for a second-hand car instead of having no car at all. On this backdrop, even a recessionary environment should not impact the auto sector as much as in past recessions. This is why, at least for the next few years, HPM with its high automotive exposure should deliver good results and the current EBITDA levels are very likely to be exceeded. We should also not forget the synergy potential between the roughly equally sized DSM and HPM businesses. These could also compensate for some recession-induced earnings shortfall.

As stated in the Q2/22 earnings materials, the Specialty Additives and Consumer Protection units were held back by logistic constraints. These have become less of a drag in recent weeks, given the generalized economic slowdown. Despite this, in H1/22 Lanxess posted $2.21 of EPS, including $0.89 from discontinued operations (i.e. HPM). When adjusted for amortization of intangibles and mainly M&A-related exceptional costs, EPS from continuing operations only were $2.30. While a recession will certainly temporarily reduce the company’s earnings (although not heavily, since its customers are mainly in less cyclical industries), the addition of the IFF MC business should add another ~$0.80-1 of EPS on an annual basis. So, overall, I do not expect earnings to crash. Without a recession, in a normalized environment and after accounting for M&A expenses, the company should be able to generate ~$5.5 of adj. EPS from continuing operations, in addition to ~$2 of proportionate earnings from the new JV. These earnings should not shrink by more than ~20% in a recession. (EBITDA was down only 15% in 2020, when much of the world came to a standstill during the early pandemic.) Therefore, the company currently trades for less than 6x its potential trough earnings.

I believe that the rapid evolution of the Lanxess story, mainly due to M&A, but also the pandemic-induced supply constraints have greatly blurred the picture. Now add a highly depressing macro environment and we see why many investors generally discard any European and especially Germany-based chemicals investment. Fewer eyes are looking for opportunities. Other sectors and countries appear more promising and safer.

Yet Lanxess is not much more exposed to Europe than many U.S.-based companies. Its business is becoming less cyclical year after year. Its free cash flow generation should improve dramatically once M&A activity slows down, while supply and logistic constraints subside. Private market valuations of similarly resilient, high-margin specialty businesses are far higher than Lanxess’ current EV/EBITDA multiple.

Finally, the HPM backstop provides solid downside protection. It is really hard to lose money here in my opinion, since the current market cap would imply a ~2x EV/EBITDA multiple ex-HPM three years from now.

On 11/10, Lanxess will host a Capital Markets Day which will certainly highlight the disconnect between its intrinsic value and market valuation. Who knows if this will already be sufficient to take the stock to a more appropriate level.

“Editor’s Note: This article was submitted as part of Seeking Alpha’s Top Ex-US Stock Pick competition, which runs through November 7. This competition is open to all users and contributors; click here to find out more and submit your article today!”