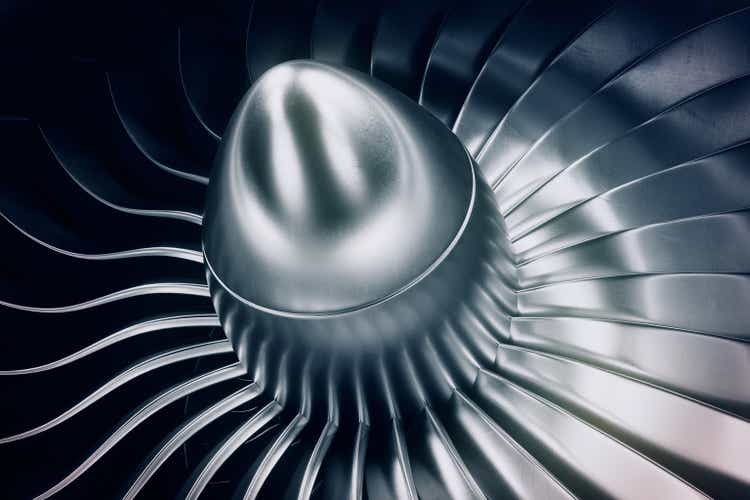 These early quarters of the commercial aerospace upswing have had their challenges, with OEMs forced to revise their production schedules in response to unpredictable component availability from their suppliers. This does set the stage for elevated performance risk in the short term, as quarter-to-quarter production may deviate from expectations, but I remain bullish on a multiyear trend of growing narrowbody and widebody aircraft construction.

Carpenter Technology (NYSE:CRS) shares have risen close to 15% since my last update on the company, making them an outperformer in a space where rivals like ATI (ATI), Hexcel (HXL), Howmet (HWM), and Universal Stainless & Alloy (USAP) have seen a little more turbulence in results and sentiment. I continue to believe that Carpenter is well-placed to leverage that growing aerospace demand into improved financials and valuation, and I believe the shares are still worth consideration here.

A Decent Quarter In Spite Of Some Disruptions

Carpenter’s fiscal first quarter results (the September quarter) were okay on balance, particularly considering some external disruptions to the business.

Revenue rose 35% year over year as reported, but fell 7% sequentially to $523M, while value-added revenue (revenue netting out metal surcharges) rose 20% yoy and fell 7% qoq. Total shipments increased 3% yoy and declined 13% qoq, with the company not shipping to full demand due to disruptions from Hurricane Ian. Averaged realized prices rose 16% yoy and 7% qoq (on a value-added, or VAR, basis).

By segment, the Specialty Alloy Operations (or SAO) saw 18% yoy growth and 7% qoq contraction in VAR, with underlying volume up 4% yoy and down 14% qoq and pricing up 14% yoy and 8% qoq. Performance Engineered Products (or PEP) revenue rose 19% yoy and contracted 6% quarter over quarter. Volume contracted 2% yoy and 17% qoq (a larger impact from the hurricane), while realized pricing increased 21.5% yoy and 14% qoq.

Profitability improved for both segments. SAO profits reversed a year-ago loss and declined slightly from the prior quarter (to $19.9M, with a 6.5% margin), while PEP profits were up significantly from a small year-ago number and down 23% qoq to $6.3M, with a margin of 7.2%.

Aerospace Is Recovering In Fits And Starts

The recovery in commercial aerospace has been more chaotic than analysts expected back in 2021 or at the start of this year. While flight hours are heading higher and fleet operators still want to renew and expand their fleets, the on-the-ground reality has been more complicated.

Airbus (OTCPK:EADSY) and Boeing (BA) have laid the blame pretty squarely at the feet of their suppliers, claiming that uneven and unpredictable component availability has forced them to be more conservative about expanding production.

Looking at the results from suppliers like ATI, Carpenter, and others, it would seem to be showing up in a wider spread of results – basically, everybody is seeing their aerospace business grow, but with some significant differences in year-over-year and quarter-over-quarter growth rates. Engines remain a point of pain in the supply chain, and companies that supply engine manufacturers (particularly with hot-side components) are seeing strong demand.

I expect more turbulence through at least mid-2023. Boeing didn’t add much clarity to its production plans at its recent investor day, other than to note that they wanted to stabilize the production of 737s at 31 per month before stretching to 38 per month (likely in the second half of 2023).

Given its leverage to specialty alloys that can be used in hot-side engine components, including titanium, and given the limited titanium capacity in the industry, I don’t think Carpenter will be short of demand. Management’s own comments reflect that, with the CEO espousing the belief that the aerospace recovery is accelerating and indicating that the company is and will be prioritizing capacity for aerospace customers as needed.

I do expect ongoing acceleration in aerospace demand as production schedules become more predictable and as production then accelerates in 2023 and beyond. In the meantime, I do think there could be some weakness in non-aero end markets. Demand in oil/gas, transport, medical, and industrial markets is still healthy, but I think Carpenter benefitted recently from orders in excess of end-user demand growth as customers looked to rebuild inventories and stabilize their own production schedules.

I haven’t made all that many significant changes to my model, though moving ahead one fiscal year does shift my long-term revenue growth down a bit to around 7%. Given the challenges with aircraft production, I have back-weighted more of my revenue growth, pushing more of it out a few years.

Over the longer term, I think there could still be an upside from the company’s underrated efforts in additive manufacturing (industrial 3D printing) and soft magnetics (useful in higher-performance motors), but the commercial aero recovery will most likely dominate the narrative for several years.

Margin improvement hasn’t been a smooth upward curve, but I do see ongoing progress in management’s efforts to make the business fundamentally more profitable across the cycle. With the recovery ramping less steeply than I’d previously assumed, my near-term EBITDA margin estimates are a little lower, but I still see mid-to-high teens margins in the coming years.

Between discounted cash flow and EV/EBITDA, I still believe Carpenter shares are undervalued and offer good upside to the ongoing aerospace recovery. An 8.5x multiple on my FY’24 EBITDA estimate (discounted back a year) gives me a fair value of just over $50, while a discounted cash flow model with nearly 7% long-term revenue growth and long-term average FCF margins in the mid-single-digits likewise supports upside from here.

I don’t really like Carpenter as a long-term core holding, as I think it’s simply too cyclical for that, but I do still see further leverage to this aerospace cycle, and I think this is a good name to consider, albeit one that is likely to have above-average volatility as it is more at the mercy of the ordering patterns and supply chain gymnastics of other companies further down the production chain.