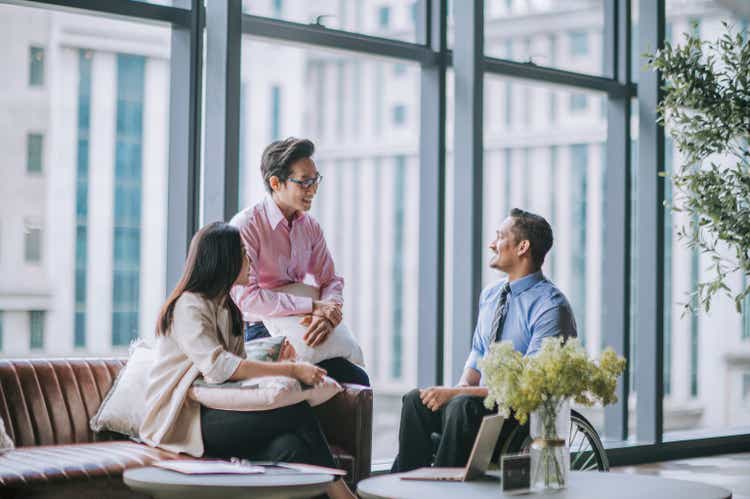 Chinese companies, particularly in the high-tech sector, have been struggling for several years already. In 2019 many investors used to monitor the trade war between the US and China. We all remember the year 2020 when the pandemic made everyone panic. The Covid-19 restrictions that followed have been ongoing in China. 2021 was particularly tough for Chinese tech since it was associated with regulatory pressures. In 2022 many of these risks were partly eliminated. Quite recently the US regulators gained access to the accounts of Chinese companies, which means the corporations from this country can remain further listed on the US exchanges. Earlier on the Chinese authorities did not want these companies to be audited by US authorities. It was a problem for investors that were worried the Chinese firms they invested or wanted to invest in could have been delisted from the US exchanges by 2024. But let me go further into detail and talk about some of the major high-tech corporations listed on the US exchanges.

I’d like to talk about some of the general news and macroeconomic factors first. So, to start with, as I have mentioned before, Chinese stocks have recently avoided delisting. In December last year, the US accounting regulator announced that they have been granted permission to audit the financial statements of Chinese companies listed in America. More than 100 high-tech corporations, including Alibaba (BABA), Baidu (BIDU), and JD.com (JD) faced the risk of being delisted in America in 2024 if their accounts were not made available to the Public Company Accounting Oversight Board (PCAOB) authorities.

Remaining listed in the US is important on its own, of course. But the benefits don’t end here. The fact that Chinese companies’ accounts would be inspected by US authorities should make American investors more at ease with buying Chinese corporations’ stocks. Earlier on I wrote an article about Luckin Coffee (OTCPK:LKNCY). Let me remind you that in the summer of 2020, there was a scandal regarding the company’s accounts. In my view, after that incident, US investors became more skeptical about Chinese companies and their reporting and auditing standards. But after the US auditors finally got access to Chinese companies’ accounts, that deficit of trust should change.

But in my view, the good news does not end here. In fact, it looks clear that China needs internet companies. It was widely discussed that Xi Jinping’s reappointment as the country’s leader could mean more problems for the Chinese economy. However, this, in my opinion, is not the case because in Xi’s speech, he highlighted several times that there was a need to stimulate the country’s economy. Deregulation is one of the traditional measures to achieve this. Moreover, Chinese tech giants make up a substantial portion of the whole country’s economy. If we take the market capitalization measure, we will see that Tencent (OTCPK:TCEHY), the high-tech entertainment giant, is the largest Chinese company by market capitalization. Alibaba is the third largest by the market cap measure. So, I think there is little incentive from the side of the Chinese authorities to further scrutinize its high-tech sector. Quite recently it was announced that Chinese regulators approved a capital expansion plan for Ant Group, Alibaba’s finance affiliate.

Also, Covid-19 regulations were removed by the Chinese authorities. Obviously, this should provide a great boost to the country’s economy as well as the high-tech sector’s general health.

I would like to focus on some of the largest Chinese corporations that are also popular in the US. These are Alibaba, Baidu, and JD.com.

I wrote a detailed article explaining the problems of BABA, the fact it faced pressures from the regulators, and also the fact its earnings per share declined due to a fall in the value of its investments. Not to mention that the numerous lockdowns in China also had a bad effect on its performance.

This can be seen from the diagrams below. BABA’s EPS underperformed the industry in 2022 due to the fall in the value of its assets.

But there are reasons to think that this too shall pass, especially given BABA’s stock undervaluation. I will explain this later on.

Just like BABA, Baidu has recently done quite poorly. The EPS and revenue history confirm this. But BIDU has a long-term future in the Chinese online market thanks to its leading position there. Baidu also has an interesting growth opportunity in the robotaxis field. The company also reported some improvements in 3Q2022 and 4Q2022 results and the management sounded confident. The gradual reopening of China and the stock’s undervaluation should help the company’s shares rebound.

JD has been facing a couple of years of negative earnings and its stock has also remained under pressure.

But JD is an e-commerce giant and seems to have good growth potential. Its competitive advantages include direct control of inventory and supply chains. The company’s stock is undervalued, especially given the fact China is opening up.

You might be unwilling to bet on a single Chinese corporation. After all, there are always company-specific risks. But there are other ways to benefit from China’s high-tech growth. First, you could spread the money evenly between the biggest corporations based in China. Second, you could choose ETFs. For example, one of the ETFs to specialize in China’s technological businesses is iShares MSCI China Multisector Tech ETF (TCHI).

Let me also talk to you about the three companies’ valuations.

First of all, let us have a look at Alibaba’s price-to-earnings (P/E) ratio graph. I know it does not suggest the company’s stock is undervalued at all.

Yet, the earnings per share are calculated based on the GAAP standards. This means the net profit measure also includes any positive or negative returns on the assets invested. Alibaba has plenty of investments that substantially depreciated. So, the company’s net profit was really small in the last couple of years due to the market’s decline.

However, this is not true of free cash flow. Just a friendly reminder: free cash flow is the money a company has left over after paying its operating expenses and capital expenditures. As you can see, it does not include any equity holdings or any other investments. Taking this measure, we will see that Alibaba is trading relatively low.

Baidu is not brilliant right now in terms of its earnings and P/E. In fact, for a substantial part of 2022, it was loss-making as the graph suggests. The P/E is also too high.

Baidu’s stock price and the price-to-free cash flow ratio seem to compensate for the complicated situation. They are lingering near multi-year lows, suggesting undervaluation.

BIDU’s P/B ratio is also quite moderate, currently standing at about 1.4, well within the 1 to 3 range.

Now, JD’s P/E story is also unpleasant since the company struggled from low earnings for most of 2022. Right now the P/E is sky-high.

JD’s price-to-free cash flow is at multi-year lows but is not as favorable as that of BIDU and BABA.

The same is true of JD’s P/B. It is lingering near multi-year lows but is not as low as that of BIDU and Alibaba.

Overall, I would say that BABA’s valuation characteristics are very good compared to its two peers. At the same time, we can say that the three Chinese companies seem to be undervalued.

There are numerous macroeconomic risks, namely that of a global recession, which is obviously bearish for all stocks. Then, Covid-19 cases could rise in China, thus forcing the local authorities to reintroduce lockdowns and pressurize the country’s economy. Another thing to worry about is US-China relations. Although the trade war seems to be over, tensions around Taiwan are here to stay. Moreover, the relations between the two countries might get worse for some other reason. For example, the US and China clashed over the Uighurs’ human rights and Hong Kong. These are just general macroeconomic threats.

Buying individual companies has plenty of risks on itself. So, it is always a good idea to avoid investing lots of money in a single corporation, no matter how bright its future seems to be. I know I state the obvious but so many investors forget that.

Overall, the recent news is a great positive for Chinese companies. BABA, JD, and BIDU should all benefit from the fact they likely won’t be delisted from the US exchanges. The corporations should also gain from the end of the Covid-19 restrictions and the Chinese authorities willingness to stimulate the country’s economy. Yet, there are still plenty of global threats. The most important one, in my view, is the recession risk. Moreover, buying individual companies that have recently been shattered is quite risky. One of the ways to spread the risks would be to buy index funds or ETFs. It would be a relatively safe bet on the Chinese economy.