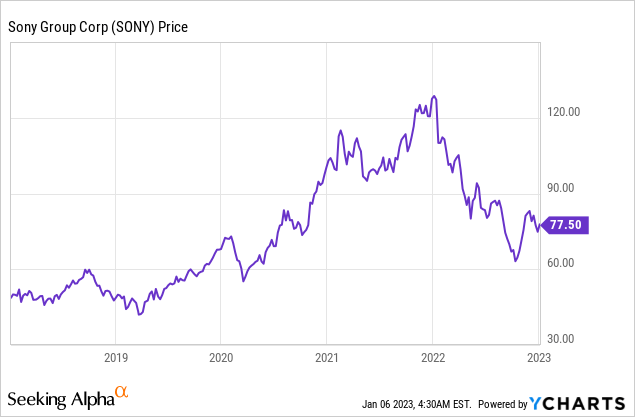 Sony Group Corporation (NYSE:SONY) is a Japanese-founded, multinational technology titan which has one of the most diversified business models on the planet. The company has continued to grow its solid leadership position across many segments from gaming (PlayStation) to music. In this post, I am going to break down its business model, financials, and valuation, let’s dive in.

Sony is a Japanese conglomerate that is a pioneer in the technology industry. Its first product was a simple rice cooker, which the company made back in 1946. In the 1950s, Sony created the highly successful TR-55 Transistor radio, before developing the iconic “Walkman” portable cassette player in 1979. In 1994, the company launched its PlayStation 1 gaming console, which was an icon of its time. This was followed by the PlayStation 2 in the year 2000, which is still the best-selling console of all time.

The latest PlayStation 5 model is also outpacing the Xbox Series XSX|S by approximately 6.8 million units as of October 2022. Thus it is clear PlayStation is the leader.

Sony is not just a game console manufacturer, the business has kept its diverse technology roots. Today, Sony manufactures TVs, headphones, cameras, and much more, it is also the brand leader in many of these areas. For example, a leading online sound review website for “best noise-canceling headphones” gives Sony both the number one and number two spot. The Sony a6 series is also reported as the “best” mid-range camera for Youtubers.

Sony is also the largest music publisher in the world and controls an estimated 5.46 million songs. Its popular music artists include; Michael Jackson, Beyonce, Shakira, Adele, Harry Styles, DJ Khaled, Taylor Swift, and many more. This means Sony Music Publishing effectively acts as a “toll road” on music sales. The company also collects royalties from radio stations and licenses its music for movies, commercials, etc. Given there are only three major music publishers in the world (Sony, Universal, and Warner), Sony is in a strong position.

But that is not all, Sony also owns an iconic movie studio (Sony Pictures). The company owns the movie rights to the likes of Spiderman, Jumanji, Ghostbusters, Men in Black, and even The Karate Kid. The company also owned the “distribution rights” to the James Bond series up until 2015.

Sony is also a vertically integrated company to some extent, as it designs and manufactures a range of its own semiconductors. The company is most well known for its “image sensors,” which are a key component in digital cameras. Sony Image sensors are used in popular phones such as the Samsung Galaxy S20, S21, and S22 models and the Google Pixel. Sony previously supplied its sensors to Huawei, but lost them as a customer in 2020 when Huawei was put on the U.S. trade ban list. At the time of writing, Sony has ~43% market share in the image sensor market and is forecasting growth to 60% by 2025. The company has even been reported to be building a new image sensor factory in Japan, therefore, it is clear management is confident about demand growth.

Sony’s leadership and diversification across multiple industries mean the company is less affected by a downturn in a specific market.

Breaking revenue down by segment, its Game & Network Services unit contributed 26% of total revenue and $5.5 billion (720.7 billion Yen) in Q2, FY22. This represented an increase of ~17% year-over-year, which was positive. This revenue growth is positive given the gaming market is currently going through a cyclical downturn, as I discussed in my posts on Microsoft (MSFT) with its Xbox and Nvidia (NVDA) with its graphics cards. Sony reported a 4% quarter-over-quarter decline in its PlayStation Plus subscribers, to 45.4 million.

The company did report profitability issues in this segment, as its operating income was nearly cut in half from $615 million (82.7 B Yen) to $317 million (42.7 B Yen), see chart below. This was driven by an increase in gaming development costs. In addition to acquisition costs related to purchased companies such as Bungie, for $3.6 billion. Bungie is a gaming publisher which developed the iconic games Halo and Destiny. Although $3.6 billion may seem like a hefty price tag, gaming publishers have become highly sought after. For example, Sony rival Microsoft has recently planned to acquire gaming giant Activision Blizzard (ATVI) for a staggering $68.7 billion. Microsoft has been facing regulatory headwinds due to competition concerns, but Sony’s deal went through without an issue, which is a positive, albeit a much smaller acquisition.

Sony Music reported strong sales of $2.67 billion (359.3 B Yen), which increased by 32% year over year. This business was positively impacted by foreign exchange tailwinds, which drove nearly $400 million in extra revenue. Most companies I report about are U.S based and thus have their international revenue impacted by foreign exchange headwinds. It is a unique advantage to see the opposite case is true for Sony as it makes a large portion of its revenue from the U.S market. Sony’s music segment also reported higher music sales from paid subscription services which is a positive.

Breaking down Sony’s other segments. Sony Pictures also reported a solid 29% increase in revenue to $2.5 billion (337.5 B Yen). This was driven by movies such as Spiderman: No Way Home, Uncharted, starring Mark Wahlberg, and even a Whitney Houston movie.

Its Entertainment, Technology, and Services [ET&S] business reported solid growth of 16% year-over-year, to $5 billion (677 B Yen). This was driven by positive growth in its digital camera sales. I mentioned in the “business model” segment Sony’s strong brand in this category. I forecast this growth to continue given the rise of the “creator economy” and more people starting YouTube channels, etc. Its Image & Sensing solutions segment is also poised to benefit from this trend, and reported outstanding growth of 41% year-over-year to $2.9 billion (398.4 B Yen).

Interestingly enough, Sony also has a “financial services” business, which reported a 17% decline in revenue year-over-year. I personally would like to see Sony focus on its core business and potentially spin off this segment, as it looks to be mostly unrelated. For example, the segment includes “Sony Life,” a Japanese life insurance company, which is part of a joint venture with Prudential (PRU).

Bringing everything together, Sony reported operating income of ~$2.6 billion (344 B yen), which increased by a steady 8% year-over-year. The company also has cash and marketable securities equating to ~$4.5 billion. Sony does have an eye-watering total “debt” of $25 billion, but this is expected for a legacy conglomerate. I also believe a large portion of this “debt” is made up on non-interest-bearing operating leases or other liabilities. The balance sheet report by Seeking Alpha indicates long-term debt of “just” $5.8 billion and current debt of just $1.4 billion, which is more manageable.

In order to value Sony, I have plugged the latest financials into my advanced valuation model, which uses the discounted cash flow (“DCF”) method of valuation. I have forecast 10% revenue growth for next year. This is fairly conservative and less than the 16% reported in the prior quarter. I have estimated prudent figures given the macroeconomic environment and cyclical decline in the gaming industry. In addition, the lower growth rate takes into account “non organic” revenue from acquisitions, which occurred in 2022. In years 2 to 5, I have forecast a faster growth rate of 12%. I expect this is driven by improving economic conditions, and the majority of Sony’s business segments continuing on their existing growth trajectory.

To increase the accuracy of the valuation model, I have capitalized R&D expenses which has lifted net income. In addition, I have forecast a pre-tax operating margin of 15% over the next 5 years. I forecast this to be driven by improved operating leverage and lower acquisition-related costs.

As an extra data point, Sony trades at Price to sales ratio = 1.13 which is 98% cheaper than its 5-year average. As a comparison, industry peer Samsung Electronics (OTCPK:SSNLF) trades at a price-to-sales ratio = 1.3, which is slightly more expensive.

Many analysts have forecast a recession in 2023 in the U.S and even Japan. This could act as a headwind against Sony in the short term, and its high debt levels don’t help, given rising interest rates. In addition, we are going through a cyclical decline in the gaming industry, as I discussed in my report on Microsoft with its Xbox sales. Therefore, Sony may face a few challenges in 2023.

Sony Group Corporation has continued to generate solid growth across the majority of its business segments despite tough economic headwinds. Its strong leadership position across gaming, sensors, and music is a positive, as these industries begin to further consolidate. Sony Group Corporation stock is undervalued intrinsically and relative to historic multiples, thus it could be a great long-term investment.