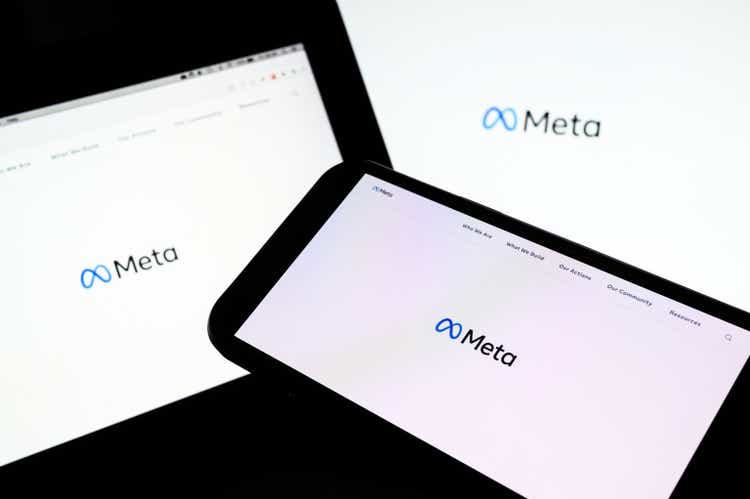 Meta Platforms (NASDAQ:META) offers a range of products that facilitate the connection and engagement for individuals, communities, and businesses through various channels, including mobile devices, personal computers, and more recently virtual reality headsets. META generates revenues from its Family of Apps (“FoA”) and Reality Labs segments, with over 95% of revenues coming from its FoA segment, which consists of its platforms: Facebook, Instagram, WhatsApp, and Messenger. With over 2.9 billion daily active users and over 3.7 billion monthly active users as of the latest quarter report, META almost has half of the world’s population using its platforms. Talk about influence! This capability enables the company to capture a significant share of the digital advertising spend worldwide.

In recent quarters META market valuation has suffered a steep decline since its peak at approx. $1.1 trillion to its current market cap of $337 billion. One of the main reasons for this decline is the strategy by META management to build the metaverse, which has led to billions of dollars invested with nothing to show in terms of profits.

Even though the stock price has performed rather poorly during 2022. I believe META is primed to continue producing outstanding results. Let‘s not forget that the company has a TTM cash flow from operations of $54 billion which allows it to fund its operations, strategic investments, and massive share buybacks. Further to this, META will be able to take advantage of future opportunities in the metaverse market, artificial intelligence market and will be able to continue to have a dominant position in the global digital advertising market. As such I consider META a buy. Let‘s dive into the financials.

With almost 3 billion people scrolling through adds in META platforms every single day the company is able to generate massive TTM revenues of $118 billion. It is no surprise that over 95% of revenues come from advertising specifically from the FoA segment. META is trying to diversify its revenues through its Virtual Reality segment; however, this segment is having trouble taking off. As a result of the metaverse strategy, shareholders have seen capital expenditures and R&D expenses grow dramatically. For reference, R&D expenses during 2020 amounted to $18.4 billion, while in the TTM R&D expenses have ballooned to $32.4 billion (Please see table above.) When it comes to operating profit these segments show a stark contrast, with Reality Labs experiencing losses in the last 8 quarters. The main issue here is the significant losses this segment has incurred, with its lowest operating loss in the past two years reaching $1.8 billion. The total losses incurred by Reality Labs during the past 2 years amount to $21.7 billion. We then have the fact that FoA operating income has been decreasing during the past 3 quarters in relation to the same periods during 2021. The combination of these two factors has significantly reduced the company‘s operating margin.

But not everything is grim, META still has strong fundamentals with cash flow from operations during the previous 12 months amounting to $54 billion, this has allowed the company to generate a free cash flow of $26.4 billion. META also has a strong balance sheet with $41.8 billion in cash and net cash position of $26.5 billion.

In October 2021, management announced an increase in its share buyback program by a whopping $50 billion. It is therefore unsurprising that META has been buying its own common stock quite aggressively during the last twelve months. META spent $46 billion in share buybacks in TTM, unfortunately for shareholders, a large portion of these share buybacks were made when the share price was still above $300.

During the latest quarter report, META announced it had retired 101 million shares of common stock for an aggregate amount of $21 billion for the 3 quarters of 2022. Further, as of September 30, 2022, $17.8 billion remained available and authorized for repurchases. I believe that thanks to META strong fundamentals which are bolstered by high cash balances at $41 billion, low debt and a truly robust cash flow from operations coupled with a low market capitalization, META could easily increase its share buyback program. At current prices, this is a truly fantastic opportunity very few companies have.

We now arrive at the most pressing matter META is currently facing, the metaverse controversy. The company is essentially losing $10 billion per year in the metaverse strategy. This includes investments in augment reality, virtual reality, immersive 3D, and horizon world. Shareholders can expect the Reality Labs segment to continue to be unprofitable for the foreseeable future, adding to the painful cash burn already incurred since 2019 at $36 billion. Now, let’s not overlook the fact that innovation always demands significant research and development investments before profits can be earned. The metaverse presents a significant opportunity not only to expand the business, but also to diversify revenues from the current reliance on advertising. Estimates suggest that the metaverse market could reach a value of up to $1.5 trillion by 2030.

But why is it important to diversify revenues? Well let‘s just take a look at the massive hit Apple (AAPL) delivered to META with its privacy changes. This hit is expected to cost META about $10 billion in revenues. It is also important to remember that being a first mover in this market could allow META to capture a significant share of the estimated $1.5 trillion market. While it is true that the investments could be lower, the potential to become a dominant player in such a large market may justify the expenditure. Additionally, it is worth noting that CEO and founder Mark Zuckerberg holds about 13% ownership stake in META, he clearly wants what is best for the company. Zuckerberg also has a proven track record of success having built social media as we know it today. It is reasonable to believe that he could achieve similar success in the realm of the metaverse.

META suffered a 75% decrease from its peak at $1.1 trillion on Nov. 2020 to its trough at $240 billion just a few weeks back. As mentioned earlier META has seen its value decrease due to the current market environment, margins decrease and the uncertainty around the company‘s metaverse strategies. This substantial decrease has brought the current market valuation of the company at $333 billion which is below 3x times revenues and slightly above 6x cash flow from operations. This is a true bargain, when it comes to a technology company with potential growth in markets such as the Global Digital Advertising market. As a reference point, according to market research firm eMarketer, advertisers are set to spend nearly $900 billion on digital ads by 2028. If META is able to maintain its dominant position it could potentially reap the benefits of this substantial increase.

To value the company, I will utilize the market multiple method, using future forecasted earnings to a reasonable 18x multiple. I say reasonable because META has almost always had a P/E ratio above 20x. I am using this method because the company is expected to continue repurchasing shares from the open market in the coming years. As mentioned earlier, at the end of 2021, management announced an increase of $50 billion to the share buyback program, indicating the company’s capacity for further substantial increases in the future. The ongoing share buyback activity is expected to have a significant impact on EPS. To illustrate this, with the company’s current market valuation of $333 billion and approximately $18 billion remaining under the shareholder-authorized share repurchase program, management could potentially repurchase up to 5% of the outstanding shares. This demonstrates the potential influence of the share buyback activity on EPS and should be taken into consideration when valuing the company. As such I have decided to focus on earnings. I have obtained the analysts’ forecasts from Seeking Alpha data and have applied a profit margin at the lower end of 25%, meaning I am considering future operating losses from the Reality Labs segment. Given these assumptions, I have applied a reasonable market valuation to earnings multiple of 18x. This multiple is in line with expected growth prospects and financial health. Using this method, I have arrived at a market valuation for META in 2026 of $745 billion.

Competition: META operates in a highly competitive environment, it competes with companies such as Alphabet (GOOG) (GOOGL), Amazon (AMZN), Apple, ByteDance, Microsoft (MSFT), Snapchat (SNAP), Tencent (OTCPK:TCEHY), and Twitter. These are all large and well-established companies vying for market share in different markets.

Regulatory risks: Given META participates in many countries, the company is subject to several regulations in its domestic markets as well as abroad. As it has been seen throughout the years, fines by regulating entities are not a rare occasion. One example could be the Cambridge Analytica fine by US regulators. Increased regulatory scrutiny will certainly impact META in the future, this could have negative consequences for their financial performance.

Cybersecurity risks: META handles large amounts of sensitive data, it is natural for the company to be a potential target for threats such as data breaches and cyber-attacks. Cybersecurity will play an important role in the future, making it a necessity to protect the security of their systems and data. As we all know, failure to protect customer data has serious reputational consequences.

In conclusion, META has strong fundamentals with a dominant presence in the global digital advertising market. The company’s Family of Apps segment generates significant revenues from ad spend, and META is working to diversify its revenue through its Virtual Reality segment. While the metaverse strategy has led to increased investments and losses in the Reality Labs segment, the company has a strong balance sheet and TTM cash flow from operations of $54 billion, which allows it to fund its operations, strategic investments, and shareholder returns.

While the stock price has underperformed in recent quarters, the low market valuation, the company’s strong fundamentals and potential for growth make META a buy. Overall, META is well positioned for continued outstanding performance and presents a good opportunity for a long-term investment.