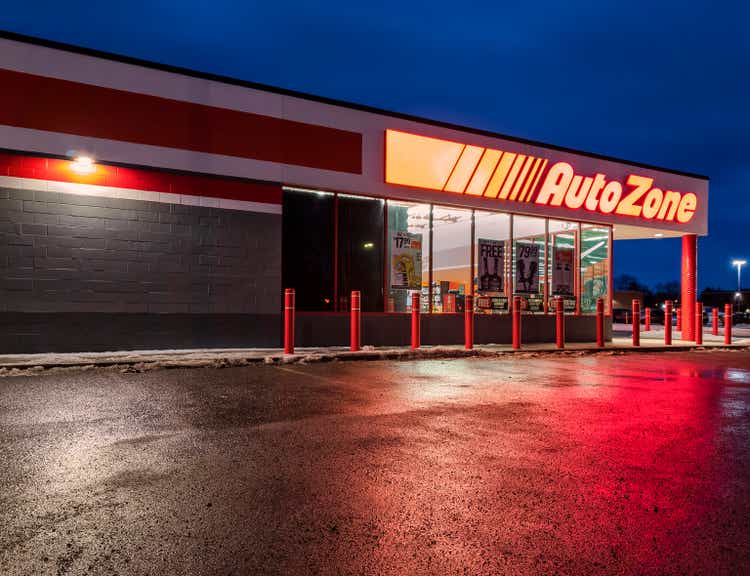 AutoZone (NYSE:AZO) has been a very successful company over the past decades. It benefited from several structural tailwinds, such as the increasing number of cars and mostly rather low gasoline prices. But in the meantime, growth is no longer as dynamic, and the valuation is at the upper end of the historical averages. Especially considering the uncertain future in a world full of electric cars that need fewer spare parts.

AutoZone’s business model has been very successful over the past decades for several reasons. Firstly, the nationwide network of branches with high-quality stores. Short distances for customers and partly open around the clock. And as we know or have experienced ourselves during a breakdown, fast delivery times and sophisticated logistics are what customers want.

Additionally, the company attaches great importance to good training of employees so that they can understand and solve customers’ wishes. Anyone who enters an AutoZone store can expect to find a competent employee who will advise him, and the desired part will be available promptly. The third point is lower costs due to the many branches and the associated economies of scale. According to our research, the store network receives consistently good Google reviews. Customers explicitly praise prices, service, and short waiting times. The screenshot below is from Houston, and all but one store have more than 4-star ratings.

The company also benefited from structural tailwinds – for example, the number of motorized vehicles in the U.S. has increased from 193M to 275M since 1990.

When oil and thus fuel are particularly cheap, people tend to use their cars more. Perhaps they prefer to travel or drive less efficiently in general. Conversely, more frequent use of a vehicle leads to more wear and tear and, thus, indirectly to higher purchases of spare parts. But also, the opposite is true; people drive less with higher gasoline prices. Even more so in 2022, as many people generally had to watch their spending more as inflation made just about everything more expensive. This effect has also been confirmed in surveys.

The company benefits from older cars

For more than ten years, the average age of American cars has been increasing, especially private ones. Older cars get more often problems and need spare parts. The company should benefit from this development and probably has already benefited from it in recent years. I suspect that especially people who want to keep their gasoline-powered vehicles will tend to repair them rather than replace them. There are a lot of people who don’t want to buy an electric car at the moment for various reasons. But if this will lead to positive effects for AutoZone, they cannot last forever. In the medium term, the cars will become too old, and more and more of the old vehicles will disappear from traffic and then be replaced by new gasoline cars, new electric cars, or people may no longer be able to afford their cars in times of inflation and recession. Or they live in cities and don’t want to own a car anymore. I don’t know what the mindset of Americans is like since I’m not from the US. In Germany, it’s the case that many young people feel they don’t need their own car anymore. However, public transport is also well-developed here. Feel free to write a comment below about the mindset of young Americans regarding owning a car.

The company is currently valued at an enterprise value of $54.73B. The market cap is $45.66B, and the total debt is $9.44B. The forward P/E ratio is 19, which is at the upper end of the average valuations of the last five years.

EPS is expected to increase by around 6% in 2023. This puts the PE/growth (PEG) ratio at about 3, which is quite expensive. Such slow growth indicates that the company is no longer a growth company but a value company. For this, the valuation is relatively high compared to other value stocks and the company’s historical average.

According to fastgraphs, the average P/E valuation is 16.4. Therefore, should the company return to this level, a negative return would be expected by mid-2024.

The company does not pay a dividend but invests much of the free cash flow in share buybacks; see below. Long-term debt is about three times net income at the moment. So the debt is not extremely high, but it has increased recently, and combined with rising interest rates, the interest payments probably will be higher in the future. I’m not sure why the company is taking on debt but buying back shares simultaneously. Since no dividends are paid out, this does not save any money.

Earlier I mentioned that low gasoline costs cause people to drive more. Conversely, of course, when gasoline is expensive, people drive less. However, the long-term effect of this is relatively small as historically expensive and cheap oil prices have always alternated.

The main risk for the company is the politically enforced trend toward electric cars, autonomous driving, and car sharing. In the past, many people wanted to and could repair at least certain things on their vehicles themselves. This knowledge is decreasing anyway, and such things will no longer be possible in the future. And even if you get it done in a service center, at least the number of parts that can break and need to be replaced is significantly lower in electric cars.

In the worst case, it could happen that the whole basis of the business model breaks away. At least with a view to the distant future, because in the next years, there should still be enough older, gasoline-powered cars that need maintenance and spare parts. But if the shift to electric cars continues and it proves true that much fewer spare parts are required, the demand for AutoZone’s products and services will gradually decline.

I always pay attention to share dilution (or buybacks) and whether there is insider selling. In addition, it’s important to look at stock-based compensations. It is immediately apparent that there has been some insider selling and not just options. And especially noticeable is that the CEO William C. Rhodes has sold 60% of his shares since October. I rarely see such a high percentage, and I look at that with every company I analyze.

On the other hand, things look much better when it comes to share buybacks. Over the past ten years, the company has almost halved the number of its outstanding shares. SBCs are also quite low and hardly worth mentioning.

In summary, the company was and is very successful and well-managed. However, the growth is now rather slow, and especially the long-term prospects are uncertain due to the complete change in the car market. How the company will continue in these circumstances cannot be said now. However, it definitely represents a risk. For my taste, the valuation is too high, and therefore the profit prospects for shareholders for the next few years are too low. In the long term, switching an entire fleet of cars to electric vehicles is a change never seen before in the company’s history.